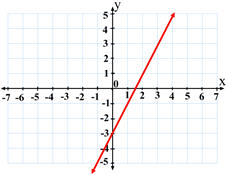 In algebra, equation is the important part and it consists of two quantities which has equal sign in between two quantities. If in an equation we find a letter it means we have to find that missing number. The main trick to solve equation is to reverse signs. For example if there is addition in the equation we will subtract that quantity. Similarly if there is division sign we will multiply the same with it. For example let’s solve one equation

So to find the value of X here we need to remove 10 and this can be done by adding 10 on both sides.

In online tutoring we train 10th grade students with that questions which are asked regularly and but before that we should know mainly what types of equations are there and how to solve the unknown variable in it.

In this we have two parts a constant and a variable which is the product of constant and variable. The graph which is drawn is always a straight line, when there are two variables.

The equation will be in this form

Here m is called a slope and c (constant, intercept point) is that point where the straight line cuts the y axis.

Now in linear equation itself there are different numbers of variables

Let’s see an equation which has two variables

We will discuss later other types of equation.