It is quite fascinating that most of the day to day products we use whether it is in cooking, cleaning or anything household item for that matter is a result of some chemical reaction. Take the common table salt; it is nothing but NaCl (Sodium Chloride) with some iodine added to it in some chemical process (so as to rule out diseases such as goitre). When two or more compounds react, they form other compounds or substances. For example, when an acid and base react, a salt is the result along with water in most cases. Take for example, the aqueous solutions of hydrochloric acid and sodium hydroxide reacting with one another. This reaction gives the following product – sodium chloride and water. Let us take this example up and study it in the form of an equation.

Aq stands for aqueous solutions and ‘l’ stands for liquid. The above is the complete formula or complete molecular equation. To understand what happens when these compounds interact, we must further break this equation down into ions that participate in the reaction. This is also quite an important topic when it comes to assignments and this is one area where most students seek chemistry assignment help. 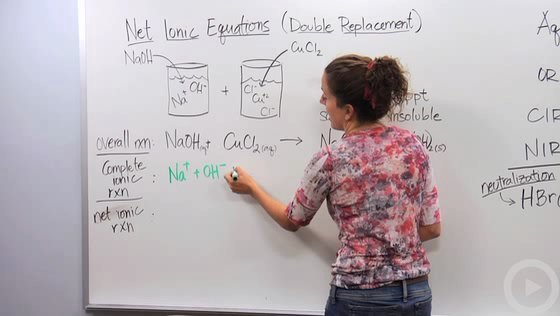 Transforming a complete molecular equation into a complete ionic equation

Before we get to this, we need to understand the different types of compounds there are:

Ionic compounds are formed between metals and non-metals or between metals and ions that are poly atomic. An ion in turn is the result of an atom having lost or gained electrons in its quest to attain a stable valence electron configuration and the resultant +ve or –ve charge the atom carries. Examples of ionic compounds are sodium chloride, magnesium nitrate and so on. Whenever an ionic compound dissolves in a solution that is aqueous, it will ionize and the ions will retain a charge.

Molecular compounds on the other hand are formed only between non metals. Carbon dioxide, water and glucose are classic examples of molecular compounds and they exist only as complete molecules. They don’t ionize and thus don’t carry a charge.

Here are a couple of things to remember before you get down to writing net ionic equations:

The following molecular equation can be written as:

Spectator Ion and what it does

A spectator ion simply does what the name suggests; it is a mere spectator and does not react. It is present in the same form in both the reactant and product side. In the above equation, two ions are spectators – sodium and chloride. Understanding this is important and most students turn towards an online chemistry tutor to understand all about spectator ions and writing net ionic equations. The main reason as to why students struggle with identifying the spectator ion is because:

For our equation, take away the spectator ions, the resultant participating ones are the following and this gives us the net ionic equation.

Remove all the spectator ions and only the ones that participate will appear in the net ionic equation. 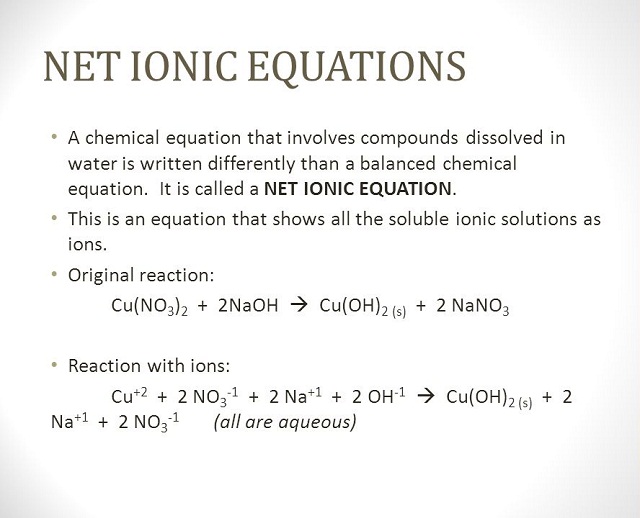 Where are net ionic equations used?

Net ionic equations are used in the following areas:

Net ionic equations are quite an important and help students understand what happens when various compounds react. Getting this fundamental idea right will help them work with complex reactions such as double displacement and redox reactions. Thus, getting the best chemistry homework help there is to work on this area is important to achieve mastery in this topic and ace exams.